A sneak peek into the process of creating the costumes for The Nosemaker's Apprentice: Chronicles of a Medieval Plastic Surgeon from student costume designer Emily Miller:

When designing for any theatrical production, one has to read the play. When I first read the play, I couldn’t stop laughing, and the fast-paced feeling you got with the changing geography could give someone whiplash. Therefore, when I began researching for the design, I had to keep that quickness in mind. In addition, the emphasis on “conceal and reveal” idea from the director, and the fact that the story is told from the perspective of the Father made it key to find a balance between historically accurate costumes and the fanciful mindset of this ridiculous character. 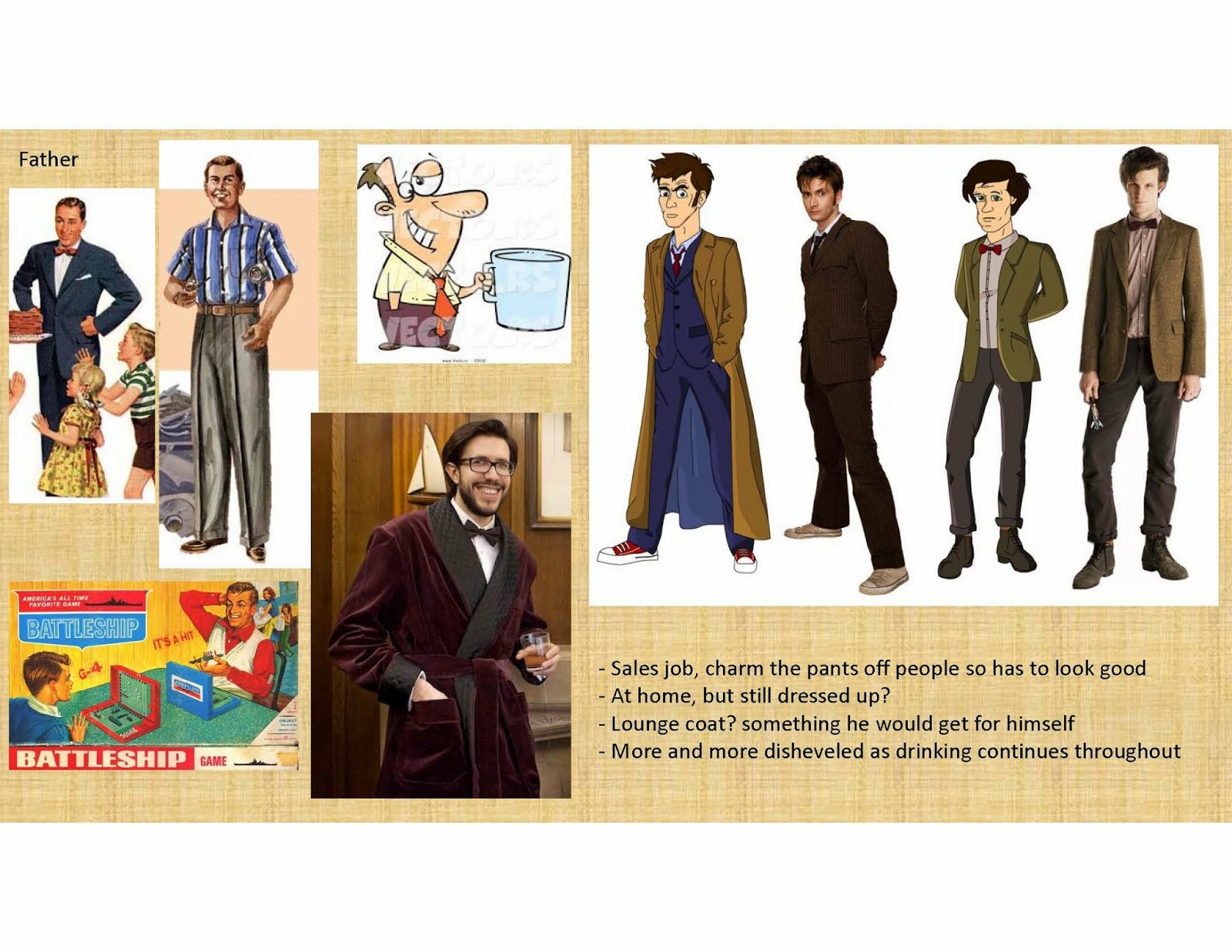 The four most prominent characters are the Father, Little Girl, our hero, Gavin, and the lady-love, Amelia. From the beginning there is a special connection between the Father and Gavin, so connecting their characters subtly through costume stirred in my head when researching and drawing them. The Father gives off a prominent vibe as the Grandfather from The Princess Bride, which the director really connected with from the start. Therefore, the research began there; a mixture of a “50s father” with the Grandfather’s soft style resulted in a simple but elegant look for our story-telling plastic surgeon. 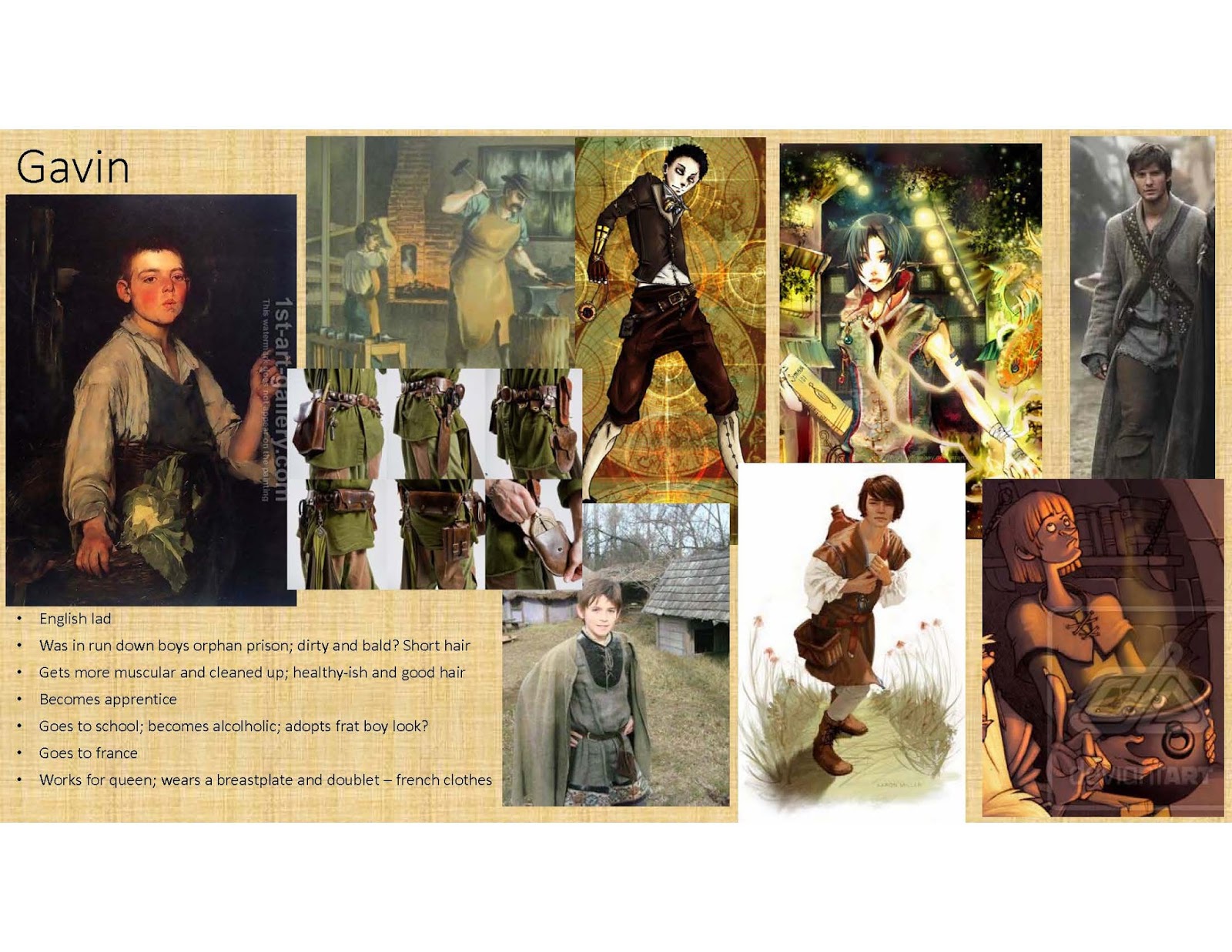 Gavin, although representative of the Father, still had this beautiful naiveté about him. At first, I was thinking of him simply as “the hero” and having a specific look about him. However, both the script and my gut led me towards a different path; Gavin is influenced one way or another by everyone he interacts with, and vice versa, so I felt it best to represent that influence through specific colors. Through research and rendering, green was ultimately chosen as Gavin’s “color”; he reminded me of a tiny sapling, breaking into the world a new bud, and ultimately shaped by its environment while making its own mark on the world. The metaphor guides how he will finally be portrayed in costume. 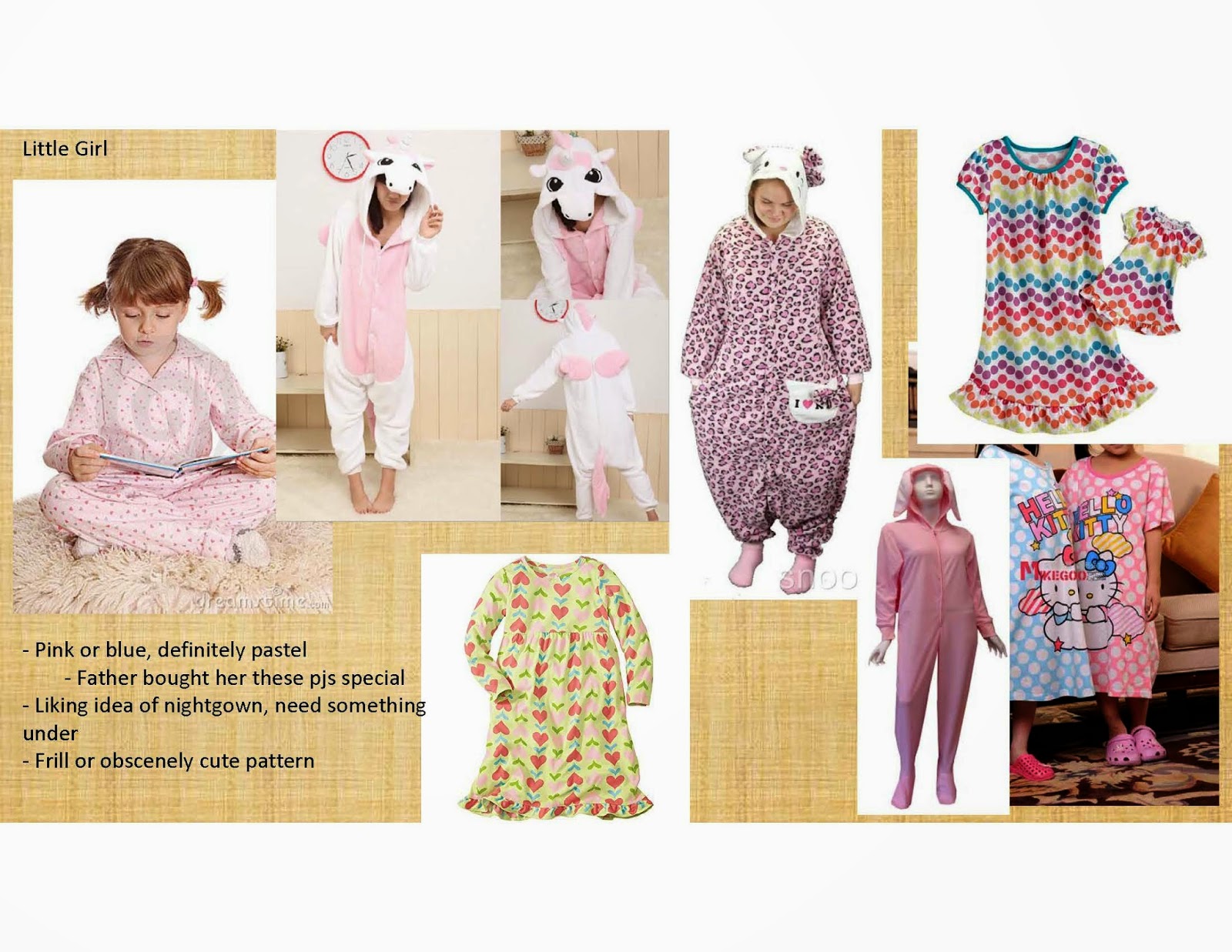 The Little Girl, as the Father’s daughter, has a specific part in the story as being the inspiration for its telling. What I found most interesting about her was the fact that we find out her “name” relatively quickly, but in the script she is the “Little Girl”. This gives the sense that no matter who she is as a character, since it is the Father’s story, he is trying to keep her in a “young” state. I began in the direction of Wendy Darling, nightgowns and pastel colors to give the appearance of youth to the actress, who already had a natural childishness about her still. Through discussion with the director, the idea was settled on making her look as young as possible, even younger than the character’s age of 8. That took me in the fun direction of sticking her in an animal onesie, such as “Hello Kitty” or a unicorn, and everything absolutely pink. Her bedroom would be drowning in pink, and so she would be too. Add a pair of super fuzzy socks, and what’s not to love? The ultimate comfort. 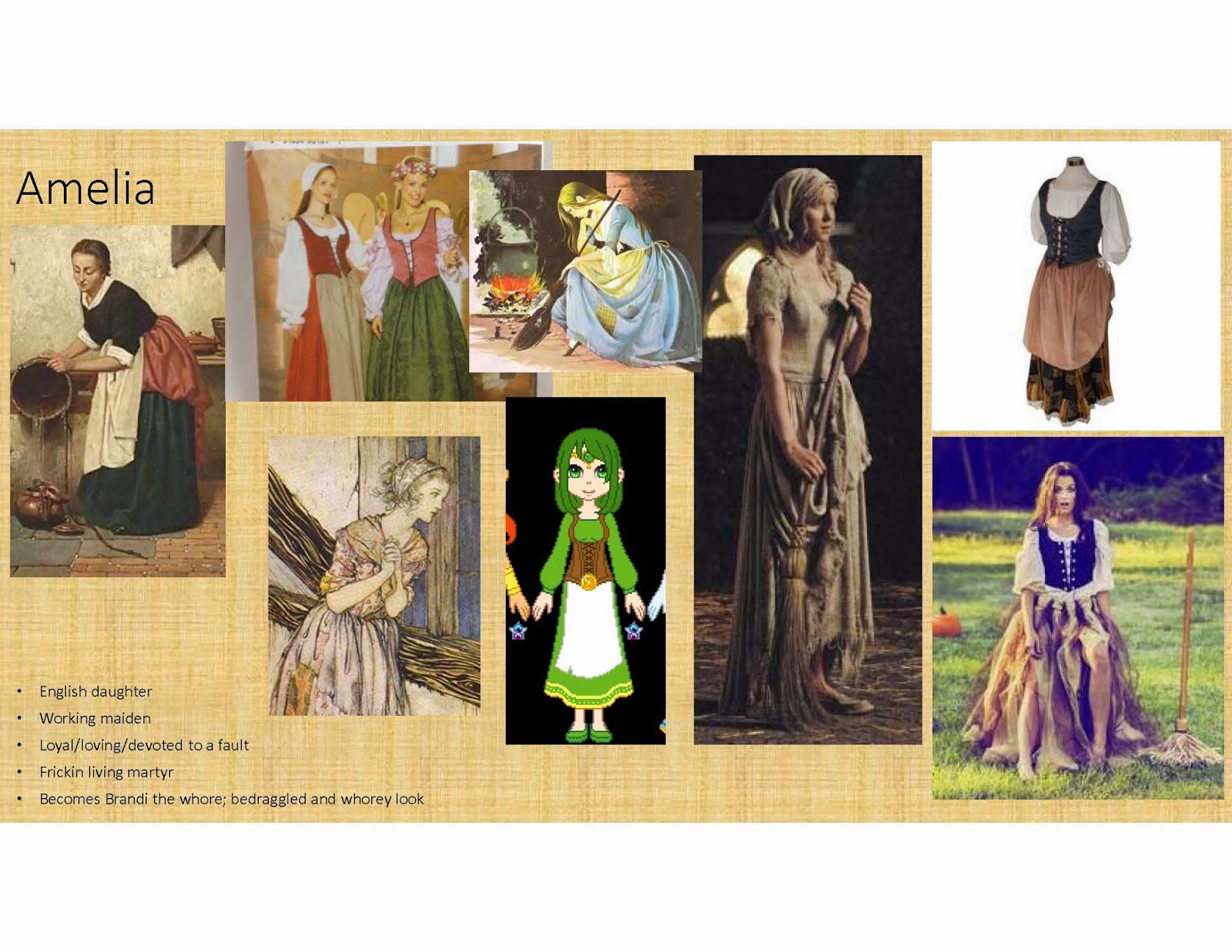 Amelia has stayed much the same throughout her design process; I loved the idea of her being the picture of innocence, untouched by every evil in the world. This idea strengthened with the director’s input that she be the essence of beauty, both sensually and sexually. The base idea in research was Cinderella-esque, the stereotypical bar wench fantasy. Being a peasant, she would have patches or holes in parts of her outfit, relating back to the “reveal/conceal” concept, but highlighting certain parts of her body without compromising the actress. A tasteful display, it was fun to design a simple, elegant costume. Even more fun was the design of her after she is ravaged; gone would be the simple, accenting over-layers; more of the rough undergarments would be revealed. The idea was to demonstrate just how much the world has affected this poor girl, stripping her down to her basest layers. However, included is a little skirt trick when she is “saved” that I had a lot of fun contemplating, hoping it’ll work out right.

Overall, the evolution of each character relied heavily upon which parts of their personalities stood out most. As a comedy, none of them have a real “depth” to them, but considering and deciding on which avenues to exploit and explore was half the fun. My particular design process relies majorly on my design research; I love combining different parts of outfits or concepts I find in pictures, paintings, drawings, etc. I can find by searching certain words. When drawing the actual product, I have little notes doodled next to each piece to clarify what is actually being attempted. I’m not the best drawer, so having the research and notes right there make everything easier to understand. Each character went through this process, in addition to a second-look after my collaboration with the director. It’s always great getting that input, because it either means you are both going in the same direction, or can merge them by changing specific things. Each of these characters came out the better, and I am super excited for the final product on stage.