Maggie Korell is the properties or props designer for Neighborhood 3: Requisition of Doom. We asked her five questions.

What made you first interested in theatre?
I became interested in theatre because as a child I hated sports. My mom wanted me to get involved in something and after five years of sitting on the bench she signed me up to audition for Alice in Wonderland and I was hooked. After high school I thought I would be done with theatre until I took an introductory theatre class my freshman year and realized that I wouldn’t be able to leave it again.

What is exciting to you about working on Neighborhood 3?
Neighborhood 3 is a play I loved after the first time I read it. This is a play that will spark so many conversations among its audience and that is what attracts me to theatre.

Where have you found inspiration for your design?
I found a lot of my inspiration in listening to my gamer friends talk about their passions. They were so enthusiastic in telling about the worlds and characters in their games. It was eerie in a way because it made the characters in Neighborhood 3 seem more accurate. 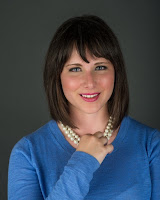 If you could design any show, what would it be?
Ever since I read Michael Weller’s Moonchildren I have wanted to work on that show. I would love to be involved in recreating the atmosphere of a college student’s apartment during the Vietnam War. The show has an excellent sense of humor that would be amazing to be surrounded by.

If you were a fruit or vegetable, what would you be?
Pineapple. I wouldn’t mind being in a tropical climate right now. Also I think pineapples have the best hair out of all the fruits in the basket.

Maggie Korell is a senior dual majoring in theatre and mass communication with a creative writing minor. Maggie has previously prop mastered for the BU Players for Macbeth (Fall 2014), The Children’s Hour (Spring 2014), The February Festival (Winter 2014), and Avenue Q (Fall 2013).Maggie is vice president for the BU Players and a member of their Season Selection Committee.

Posted by Unknown at 3:47 PM No comments:

In preparation for the BU Players production of Neighborhood 3: Requisition of Doom by Jennifer Haley, we found that Sacred Fools Theatre Company asked the playwright some great questions about the process of writing the play.

Posted by Unknown at 1:03 PM No comments: