How does an actor prepare to audition on Zoom?

In a continuing series about auditioning, we prepare to audition for The Screen Plays, a virtual festival of new plays by students. To read the series on auditioning. 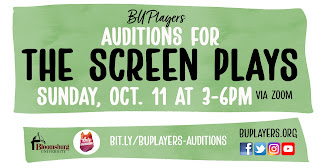 If you are an actor interested in auditioning for The Screen Plays, you will sign up for an audition time, complete the audition form, then select one of the monologues from one of the new, student-written plays. (All the details of how to audition are posted on the BU Players auditions page.) Once you have taken those steps, you are ready to prepare the monologue for the audition.

How do I prepare a monologue?

How do I perform a monologue in an audition setting?

How do I perform a monologue on Zoom?

For a video tutorial one best practices for "self tapes" check out this video.

How do I dress for an audition?

Dress professionally, but with the ability to move comfortably.

Do you have questions about the process?

Professor David A. Miller teaches acting, directing, and playwriting at Bloomsburg University. He regularly directs productions for BU Players (Everybody, The Arsonists, Macbeth, The Nosemakers Apprentice: Chronicles of a Plastic Surgeon) and professionally (Amphibian Stage Productions, The Artful Conspirators).