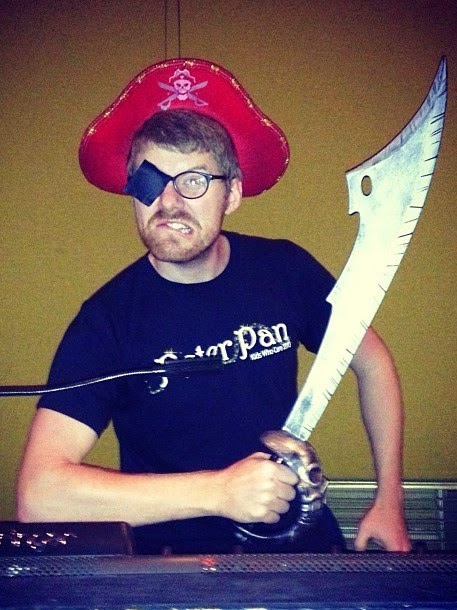 David Lanza is a guest professional serving as Sound Designer for the BU Players production of The Nosemaker's Apprentice. We asked him five questions.

I played in some horrible rock and roll bands in high school.  One of them actually decided for some reason to commit our sounds to CD, and we booked time at a local recording studio.  I was fascinated by all of the gear and knew I wanted to do something like that.  I also acted in community theater growing up.  I studied audio engineering in college with the intent of working in a recording studio, but slowly I began to combine my audio training and my theater background.  That led me to theatrical sound design, and I've been doing it ever since.

What do you find interesting about this play?
Simple, it's hilarious.  There's very few scripts that make me laugh out loud when I read them by myself, but this one had me rolling from the first page.

Who is an artist you admire?
The author, Douglas Adams.  I admire his ability to speak truth to things I in my head, but also make them accessible and extremely funny.

If you were a fruit or vegetable, what would you be?
A Kumquat.  Why not?

David Lanza (Guest Sound Designer, The Nosemaker's Apprentice) graduated from Belmont University with a degree in Audio Engineering Technology.  He works as the resident sound designer for multiple theaters in the Dallas/Fort Worth area including Amphibian Stage Productions, Jubilee Theater, and Kids Who Care, in addition to acting as house sound technician for the Fort Worth Community Arts Center.  David has also acted as a production sound operator for national tours of Menopause The Musical, A Tuna Christmas and Tuna Does Vegas.
Posted by BU Players at 10:00 AM