How does an actor prepare for an audition? (Auditioning, Part I)

Auditions for the fall productions begin next week. Some students have auditioned before, others are auditioning for the very first time. To prepare everyone for auditions, we want to share some insights about auditioning in series of blog posts. In the first post of the series, we asked Professor David A. Miller—who teaches all levels of acting at BU and will direct this fall's production of Neighborhood 3: Requisition of Doom—five questions about auditions.

What are auditions?
Auditions are an actor's version of a job interview. Unlike a more traditional interview, however, we start working together during the interview. The actor has a chance to act and the director has a chance to direct during an audition. The director is looking for not only someone who is talented and right for the role, but also for someone they want to work with. 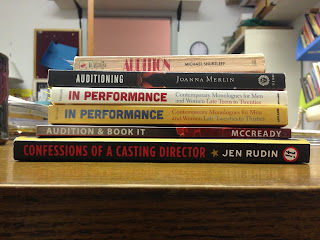 How does an actor prepare for auditions?
It depends on what the audition is asking for the actor to prepare. These differ from audition to audition. If you take a look at all the auditions on Playbill.com right now, for example, they are asking for different things. They may be similar in some cases, but there will probably be variations. One of the "standard" things that an actor may be asked to prepare for a general audition is a monologue--a one to two minute piece of text from a play in which one character is speaking (continuously) to another character, to the audience or to themselves. For musical auditions an actor will likely be asked to prepare a song or a cutting of a song and will be asked to dance during the auditions if the musical requires dancing.

What should an actor wear to an audition?
This is always an interesting question because I don't think there's a perfect answer. My advice is to wear something that is professional, an outfit you can move in, and one that you feel good about. In this case professional does not meet formal. It's an interview for a performance position, as opposed to an office position so a suit and tie are not really expected and would likely restrict your movement.

What should an actor bring with them to an audition?
There are some things that an actor can expect at most auditions. Actors should bring a headshot (a standard photo for all actors) and a performance resume. (For auditions at Bloomsburg, you have the chance to hand write your experience and we don't require a headshot.) An actor may be asked to complete an audition form that includes their potential conflicts with the rehearsal and performance schedule. It's so important that an actor look at the calendar closely before they arrive at an audition. If they are going to be out of town for the performances, it may not make sense to audition for the show.

Do you have any other tips about auditioning? Anything that an actor should be sure to do? Anything that an an actor should be sure to avoid?
First and foremost, remember that the director wants you to do well. They are on your side. They want the best possible cast filled with open, friendly, talented folks. Be confident and be yourself. Second, be prepared. Understand what you are asked to prepare. Then be sure to prepare and over-prepare the material (because when nerves kick in, the preparation has to be there). Finally, learn as much as you can about auditioning. Take an acting class if you haven't already. Read a book; there are entire books on auditioning. My favorites are Audition by Michael Shurtleff, Auditioning by Joanna Merlin and In Performance by JV Mercanti (a series of books which have a fantastic introduction about auditioning as well as a lot of great monologues). And BU students should be sure to attend the Audition Workshop, generally offered each fall, with the Division of Theatre and Dance faculty at Bloomsburg University.

Note: This year's Audition Workshop will be offered on Tuesday, September 1 at 6:30pm to 8:30pm in the Theatre Lab. No need to prepare anything, just show up. Auditions for BU Players productions are open to all BU students.